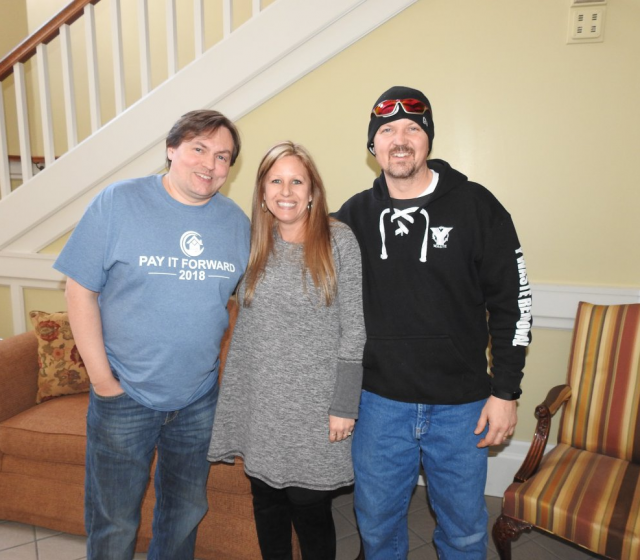 The fifth annual Pay It Forward project, sponsored each year by T’NG Plumbing of Dexter and with the support of many individuals and businesses, will honor a man who is both humble and hardworking — and well-deserving of a gift.

Daniel Johnson, 47, of Austin, is this year’s pick for a bathroom remodel by the plumbing company’s owners, Todd and Gina Grundmeier through the Pay It Forward non-profit organization.

So we announced our choice this morning for our next PayItForward project. This year, like all years so far, carries a different set of circumstances. The gentleman we have chosen lives in Austin. He is a security officer employed through an outsourced security company for Hormel & has been there nearly 20 years. This story is about a blue collar worker, who pays his house payment, his car payment & his day to day living but never has enough to take care of some things that we all feel are very basic. His only running water is to his bathroom sink. His shower & his kitchen have been both capped within the past 3 years due to leaking. The repairs that are needed are extensive enough due to some plumbing issues that need much more attention that just repairing. So he has adapted to what he has and you would hear no complaints. Although our choice is never easy because there is so much need, we felt it clear this year that Dan was where we are needed the most. How excited he is to learn he will get a running shower again & running water to his kitchen sink!! (Seems a bit minor when most of us think about it because we “have” those things) Even with all the nominations as we sorted through, we felt that giving him back what he doesn’t have was without a doubt the best thing to do.We are going to show Dan the meaning of Community Love

Our project will take place the week of March 26th this year and will be completed by the 30th. As usual we will be taking on so much more, that I cannot share at this point so we don’t ruin any surprises we have for Dan – but because this is our 5th year ~ we again want something remarkable!!