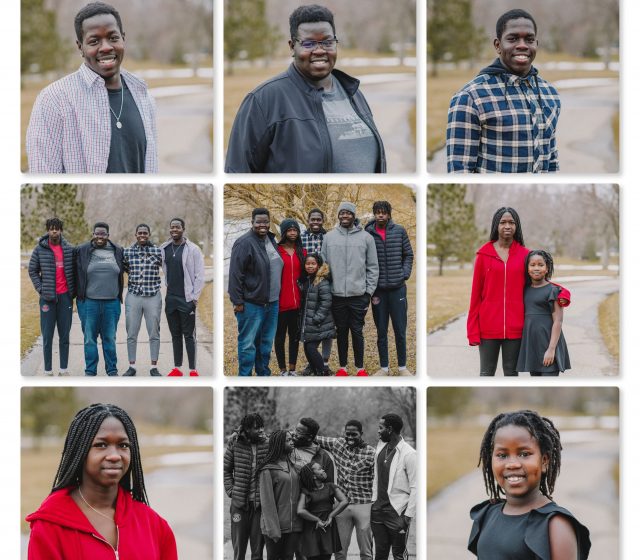 Opiew, Ochain, Okey, Cham, Awillie & Mary lost their father Chol November 24, 2021 when he was murdered in Ethiopia while visiting his father. Their home, their hearts, their lives needed our help.

Opiew, Ochain, Okey, Cham, Awillie & Mary lost their father Chol November 24, 2021 when he was murdered in Ethiopia while visiting his father. Their home, their hearts, their lives needed our help.

PayItForward crew spent the week of March 7 – 11 updating, renovating, remodeling & rejuvenating the home for Chol’s children & their “uncle” that lives there.

The nomination letter came to us from long time neighbors, Tom & Alicianne Fritz. The main floor tub shower was unusable & the short ceiling in the upstairs bathroom made it vertically challenging for the 5 tall men in this home. Chol had desired to work on home repairs when he returned home from Ethiopia. Sadly, Chol would not make it home & it seemed the community of Austin was suited to step up & help get these repairs & many others taken care of.

Chol was an asset to the Austin Community & his African Community as well. Chol had fled South Sudan in 2000 where he initially was hosted by the Solberg’s through the Lutheran Brotherhood in Florida for just over a year. At that point, Chol had decided to move to Minnesota. Chol had been a resident of Austin ever since. He was a crucial part of the African Asian Refugee Services Agency in Austin, he was an interpreter at Austin High School, he worked several jobs & he had completed his education earning a 4 year degree in Political Science. He was always trying to make the world a better place & his smile was one you could NOT miss – ear to ear & it would light up a room.

We wanted to alleviate the worries & remedy the issues in the home so his children would be able to work on their healing & show them how much the community of Austin cared for & loved them. By the end of the 5 days, we were surely able to accomplish just that – and more.

To recap what happened – I’ll walk you from the outside of the house in – room by room.

A simple thing – replacing their house number sign that hung from a light post at their sidewalk entry. New gutters on the house by McKay Brothers Seamless Gutters.

A new counter top height table & chairs in the dining room. I purchased this item from Brick Furniture in Austin. New rugs in the dining & living room.

Main floor bathroom was gutted & a shower only unit installed. Carefully placing the riser of the shower head at 7 feet to accommodate this very tall family. New flooring, vanity, granite top by CCI Granite, toilet, towels & all the accessories that need to come with it.

The upstairs bathroom was gutted & a new soaker tub was installed. The tiled walls of the tub included adding a niche for storage & tiling the ceiling. A custom vanity was made by Sean Selmecki of Midwest Cabinetry. The granite top also supplied by CCI Granite. New faucets on the vanity & tub shower were provided by Delta Faucet Company.

The flooring was generously discounted & purchased from FloorCo of Rochester. All the installation of carpet from basement floor, stairways and entire upstairs of 2nd story – was donated by Med-City Installation.

We used over 24 gallons of paint in the home from basement to 2nd story – all of which was donated by Sherwin Williams of Austin. This was their first year on our project & we were grateful for their joining our team!

Diamond Construction’s Matt Helgeson also joined us for his first time. He was the contractor responsible for the upstairs bathroom, tiling the shower & so much more! Eric Thompson took on multiple tasks from painting, making window trims & multiple odds & ends throughout the house. Aren Crews was primarily the man behind the beautiful cabinetry install in the kitchen. His attention to detail & all those final touches were a huge asset to the project!

Fox Electric did all of the new light installations & the electrical upgrades that were needed. Outlets in the kitchen were repaired & new lighting installed as well above sink & entire kitchen area.

Advantage Heating & Cooling had owners Lucas & Jess on site to install the new furnace & prep for the future new install of a an air conditioner.

For our 4th year, we were joined by fellow plumber Caleb / Felton Plumbing join us for Monday & Friday to assist with plumbing work & other things around the house.

Danny Muzik was on site to get all the taping & mudding done with his amazing skills – Muzik’s Muddin’.

Endres Window Cleaning did all the windows & glass work inside the house AND out! You literally could NOT even tell there was glass on the windows!!

ServPro of Austin Albert Lea was on site Monday & Friday to take care of carpet removal from basement walls as well as cleaning & remediation needed. They returned Friday to help with final touch cleaning & Nick & the guys were even hanging pictures!

We hauled away over 12 TONS of demolition & clean out debris, containers & disposal all donated by Thompson Sanitation.

When the weather warms up & more exterior detailing can be done – Weis Landscaping & Design will go back & take care of the exterior landscaping work around the home. We will update those before & after pictures once that portion of the project has been completed.

Morgan was on site all week and went far beyond her photography skills, she was hands on painting, boxing, moving & cleaning as the week buzzed by! I’m blessed that Converse Candids not only does the pictures of the family but is on site involved all week too!

The family of 7 got to arrive home for their reveal that Friday night in style as they pulled up in a big, white stretch limo – courtesy of Dawson Limo of Glenville!

Thanks to Austin PIzza Ranch for the opportunity to have fundraisers! It’s awesome that they give the ability to help the community in their efforts.

We also need to thank our website hosts & builders, Wendy was on the job on Friday making runs to the store, helping hang curtains & running about house to help with final touches as well! We want to thank Aurora Web for the physical contribution on site & also for being a vital part of our web world & hosting!

Thanks to some other financial donors – ReMax agent of Austin, Molly Cass, Lindsay Bires Agency for American Family and Home Federal Bank.

And finally a big thanks to our biggest t-shirt sponsor & one who has been a part of our program support for the last few years – Accentra Credit Union.

And we need to thank WalMart for their grant this year! We appreciate knowing our work doesn’t go un-noticed!